by Olive Pellington on September 17, 2015 in Uncategorized • 0 Comments

Text Neck is a label you have probably been hearing a lot about. It sounds like a funny or even sarcastic expression for a moody teenager who is constantly on their phone whilst you are trying to have a serious conversation with them. So, what is Text Neck and how serious a condition is it?

Text Neck is an actual condition now recognised by many doctors. X-rays of children with this condition show a degenerative state that is usually associated with middle aged people with decades of poor posture habits.

The continuous curved position teens find themselves in for most of the day whilst using their phones can cause severe headaches, excessive strain on the spine and lead to spinal degeneration. This is the description of Text Neck

In its normal (neutral) position the head weighs between 10-12 lbs. When the head is tilted forward as described in Text Neck conditions the force on the spine increases to 60lbs. That is six times the weight the spine is used to. That is the equivalent of having a nine year old child on your shoulders. Now perhaps you can understand why being in this position for long periods of time can cause such severe problems if left unchecked.

If you feel that you or your child suffers from Text Neck don’t panic. Use the tips below and seek medical advice if symptoms persist. To ease the pain caused by Text Neck try the following

Bring the phone to eye level when using it

It is true that activities other than texting can cause the head to tilt forward in a similar way. However, these activities, such as doing the washing up, are done fairly quickly and usually only a few times a day. You can reverse the symptoms of Text Neck if you start doing something about it sooner rather than later.

← You and Your Child the Path to Success
Are You Bragging or Complaining? → 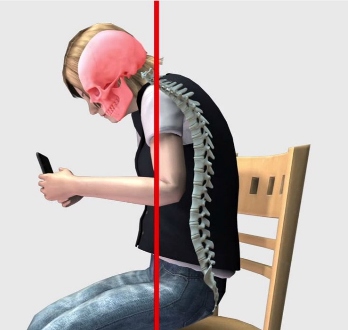